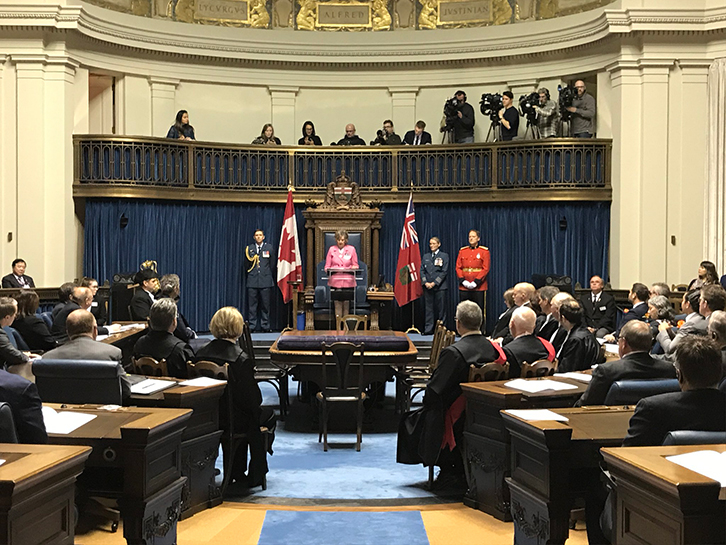 Tuesday morning, I received a phone call from a Make Poverty History Manitoba member. He lives on a disability benefit that provides him only $180 per month for food and other basic necessities. He wanted to know if he can expect any change soon. I told him we would see in the Speech from the Throne that afternoon what, if anything, the Province has planned for its long-promised poverty reduction strategy.

I am afraid I will need to phone him back to say there was no mention of a poverty reduction strategy. Although the Province has promised to begin consultations soon, the government did not commit to timelines or targets as to how quickly it would end poverty. There were no commitments on increasing benefits for Manitobans in the deepest poverty who depend on social assistance, some of whom live on incomes as much as 47 percent below the market basket measure of poverty.

The working poor were also left out with no mention of a much-needed increase of minimum wage. At $11.15 per hour, Manitoba’s minimum wage is effectively a poverty wage. By contrast, other provinces, including Ontario, BC and Alberta, are moving towards a minimum wage of $15 per hour.

On the positive side, the “government recognizes that complex social problems like poverty, crime, homelessness, mental health and addiction are interconnected and that causal factors cannot be tackled in isolation.” All the more surprising then that the Province did not take the opportunity to launch a comprehensive plan with targets and timelines for ending poverty.

One area that did receive attention was the urgent need to reduce the number of children in care of Child and Family Services (CFS). We congratulate the government for identifying this difficult policy area as a key issue that must be addressed to significantly reduce poverty in Manitoba. As well as weighing heavily on our justice system as was noted in the speech, evidence shows that involvement in CFS one of the strongest predictors of youth homelessness.

Given that 90 percent of children in care are Indigenous, we urge the government to consult and work closely with Indigenous community. Manitoba must develop and implement effective policies that reduce the number of children in care while breaking the cycle of colonialism which has too long stained child welfare policies across Canada. We agree on the need for innovative solutions, but we are wary of government’s stated preference to rely on social impact bonds, which have demonstrated very limited effectiveness in the few projects where they have been tried elsewhere in Canada.

The Province also promised a strategy to improve access to addiction treatment and mental health. Here again, we are in agreement that this is a priority. Make Poverty History Manitoba championed improved funding for mental health in our Know Poverty campaign last year. However, the province is focused on providing supports in emergency rooms. We have argued we also need more supports upstream in community-based resources where low income people will have the best access.

The Province also announced that they would soon release a provincial housing strategy. Consultations were conducted last year, but we have still not received either a “what we heard” document or a draft plan. In this case, the lack of details is understandable. The Province is waiting on a federal National Housing Strategy released the day after the Manitoba Speech from the Throne. Nonetheless, it would have been useful to outline the direction the Province wishes to take in ensuring all Manitobans are adequately housed.

In order to end poverty in Manitoba, a stronger political will is needed than was demonstrated in the Speech from the Throne. Unfortunately, the lack of political will crosses all party lines, and all levels of government. The alternative throne speeches by the Opposition Liberals and NDP offered few commitments directly related to poverty reduction. Numbers released by Campaign 2000 showed Manitoba has achieved little progress in reducing child poverty since its campaign started in 1989. Child poverty especially affects Indigenous children, one in two of whom in Manitoba live below the poverty line. It is difficult not to see a causal link between these data and the decades of underinvestment by the federal government in health, education, housing and basic infrastructure on First Nations reserves.

Noting the very high number of Manitobans, especially children in poverty, Make Poverty History Manitoba along with Basic Income Manitoba will soon launch a campaign calling for a shift away from EIA towards basic needs supports that are available to all low income Manitobans to lift everyone above the poverty line. This needs to be part of a comprehensive plan with targets and timelines for poverty reduction including housing, childcare, health, education and good jobs. We need all levels of government at the table to realize these plans.

Manitobans have been waiting for years for the Province to deliver on poverty reduction, something Premier Brian Pallister said said was his first priority after his government was elected last spring. The Make Poverty History Manitoba member who called me yesterday, along with 180,000 other Manitobans living in poverty, will unfortunately all have to keep waiting: how much longer remains to be seen.